Share All sharing options for: Talking Tactics: Bolton (A)

La la la la laaaaaaaaaaa. Joy untold swept through the away end at the Reebok Stadium on Saturday like a north-western hurricane, as Sunderland came away from Bolton with a 2-0 victory. Late goals from Stephane Sessegnon and Nicklas Bendtner capped a superb second half performance from the Black Cats, and rewarded Steve Bruce for his decision to finally shake things up a bit.

The visitors lined up for the first time this season in a proper 4-4-2 formation. Bendtner returned to the line-up, having had to miss last week's game at Arsenal due to being on loan from them, and the tall Dane found himself partnered by youngster Connor Wickham. The Sunderland starting XI saw no room for either Lee Cattermole or Ahmed Elmohamady; Sessegnon occupied the right-wing, Seb Larsson the left, while Jack Colback and David Vaughan lined up in the middle.

Much maligned for his seeming lack of tactical nous in recent weeks, as well as his reluctance/inability to change things for the better, manager Steve Bruce supplied a cutting riposte to his critics on Saturday.

With the game nearing the hour mark, and Sunderland on top but struggling to make a decisive breakthrough, the Black Cats' gaffer decided to make a few subtle but influential changes. Firstly, he swapped his wingers to what seems to many to be a more logical set-up; Larsson was moved to the right with Sessegnon on the left. Furthermore, though the visitors retained their 4-4-2 set-up when without the ball, when in possession they reverted to a 4-3-1-2 formation (with Sessegnon fitting in behind the two strikers), and combined it with fast and effective attacking play.

The decision to start Connor Wickham paid dividends for Bruce. Though he struggled to make an impression on the game in what was, in truth, a poor first half, the eighteen year-old did show some promising signs. This was built on in the second half when his hold-up play, aided by the display of a first touch of high quality, helped Sunderland maintain prolonged periods of pressure. 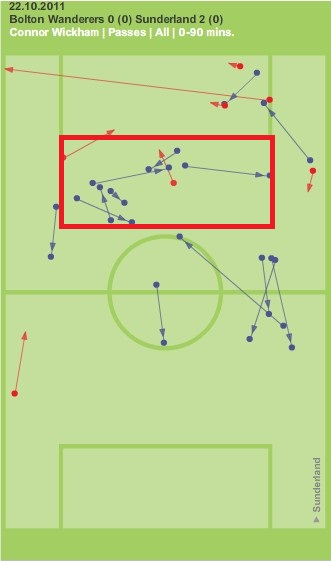 The above chalkboard shows Wickham's passing activity at the Reebok Stadium. Although the pass recipients aren't shown explicitly, the majority of them were to red and white midfielders, a sign that the Black Cats were looking to get forward where possible; a marked departure from last week's negativity at Arsenal.

Furthermore, Wickham was effective in drawing fouls. He won four free-kicks for his side in the Bolton half, something which further heaped pressure upon the home side. Owen Coyle noted the danger Wickham was posing, and soon instructed England international Gary Cahill to mark him as opposed to David Wheater. Although Cahill was successful in some challenges with the young striker, Wickham still caused his more experienced counterpart a whole host of problems.

As stated, Bruce moved Stephane Sessegnon into a central role behind his two strikers. This worked much more effectively than the recent ploy of having the Benin international behind a lone striker; Bendtner and Wickham complimented one another and held the ball up well, and those two doing their jobs allowed the industrious Sessegnon free roam to try and pry an opening in the Bolton backline. He played well, and was rewarded for his efforts with the game's opening goal.

In addition, the change to 4-3-1-2 when having the ball encouraged the two full-backs to get forward and support. To this they duly obliged, and the way they swamped the home side meant Bolton reverted to simply clearing the ball or hitting long balls forward, which the Sunderland defence dealt with easily. As shown below, after the sixty minute mark, much of right-back John O'Shea's activity came in advanced positions. 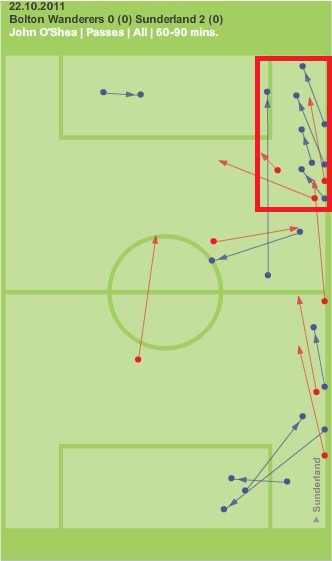 In the first half, Sunderland still looked fairly nervy when on the back foot. Runners went untracked at times, indeed, the Black Cats were lucky that Darren Pratley was wasteful when he was granted an excellent opportunity on the edge of the box.

However, they did shore up. John O'Shea started poorly and allowed Martin Petrov far too much room down the left side, but soon got closer to the Bulgarian and restricted the room in which he could play. Furthermore, Kieran Richardson had an excellent game at left-back. As observed by the Roker Report's resident captain, Michael Graham, Richardson was forced into only two failed tackles down the left side of the field on Saturday; this small number suggests that Richardson's positioning was good throughout the game, as a poorly position full-back would be forced into a lot more desperate challenges than he was.

In addition, the defence was helped greatly by the central midfield pairing of Colback and Vaughan. Whilst this column has recently made much of the negligible contributions from the midfield when Cattermole and Craig Gardner line up alongside one another, the opposite was true at Bolton.

The two diminutive midfielders offered an abundance in both attack and defence. The best example of the former can be seen in Sunderland's second goal; with the game nearing its end, and the Black Cats possibly preferring to sit on a one goal victory, Jack Colback burst from midfield towards the Bolton penalty box. In the process, he drew the attentions of the only two opposing defenders that were back, which in turn left space for Nicklas Bendtner to receive a pass and finish cooly in front of the away end.

Defensively, the two were instrumental due to their excellent ball retention. A glance at the statistics on whoscored.com shows that Vaughan was successful in a colossal 90% of his pass attempts (Xavi-esque!) and also contributed two key passes.

This was more of an attacking performance for Sunderland, but the foundations for this in the second half was their solid defensive display.

It is cliched, and not at all tactical, but one contributing factor towards Sunderland's victory could well have been the travelling away support. (NB. I realise how shameless this is, as I was in the away end on Saturday, but I'm writing it anyway.) Ardent red and whites packed out both tiers of the away end, and remained in strong voice throughout.

With Sunderland attacking towards them in the second half, the team did seem visibly buoyed by the ceaseless encouragement roared from the 4,000-strong hoard. With an equally good second half performance at Liverpool coming under similar circumstances, one wonders how much of a bearing such support can often have.

Bolton, it must be said, were poor. They perhaps shaded opening exchanges, but as soon as Sunderland's back four settled, they rarely looked like scoring.

Sunderland, on the other hand, played well and deserved their victory. There was no one bad performance; John O'Shea made up for his poor start with both his attacking play and a fantastic last-ditch clearing header with the score at 1-0 near the end.

There was a segment of this game, though, that suggested much of this Sunderland side's fortunes is built on player confidence. Having gone 1-0 up after sustained pressure, the visitors suddenly looked nervy. Vaughan and Colback's previously good passing broke down, and Bolton would have been level if it were not for an excellent Simon Mignolet save. Though they eventually saw the game out and doubled their lead, it would seem this is a side that withers under the weight of expectation at times – a mental worry that Steve Bruce and his coaching staff must seek to eradicate sooner rather than later.

All in all though, it was an assured performance from the Black Cats. No one will get carried away just yet, but this win was much needed, and can hopefully be built upon against Aston Villa next weekend.