The Art Of Football: We Speak To Photographer, Stuart Roy Clarke

Share All sharing options for: The Art Of Football: We Speak To Photographer, Stuart Roy Clarke

We've had the privilege to speak to many people in and around football since we started this site. We've spoken to numerous ex-players, journalists and broadcasters and now we've manged to take things in another direction - photography.

Having been big fans for a long time (our own Michael Graham owns a few pieces of his work) it was a delight to speak to Stuart Roy Clarke, an incredible photographer who has captured many memories of Sunderland AFC, and others.

Stuart is the brains behind Homes Of Football - A site you can visit by clicking HERE or if you're quick his gallery in Ambleside before it moves to the National Football Museum in Manchester. Stuart can't take his entire collection over to the museum however, and is having a SALE on many of his prints, so be sure to check out the sale area too HERE.

Not content with that, he's also released some excellent books, including "Cradle Of The Game" which you can buy from his website, or, because Stuart's so damn nice, you can WIN one right here. Details at the end of the article.

So with business out the way, let's meet the man who has captured so many memories...

I see from your website that you started Homes Of Football in the wake of Hillsborough, but were you in sports photography before that, and how did you get started?

Stuart: Yesterday, after the steel city derby (I am attempting to go around the entire clutch of homes of football again,+20 years on) - I had my car mended in a garage bang opposite Hillsborough. The mechanic reckoned by his actions he had saved my life! I feel what I do is unique and jumps right out of the page and over the barrier of being ‘sports photography'.

Are there any particular sports photographers you admire or inspire you?

Stuart: The photographers I admired, student-days, were the ones with a strong sense of mission and/or those with a sharp quick sense of visual humour. In the first category Highbury-borne Donald McCullin going off to wars and then seeing impoverishment and broken lives around the streets of Bradford and London etc. I like Elliot Erwitt, American, for whom every shoot had an element of seaside postcard humour. I like German August Sander, a simple chemist, turned artisan, who made portraits of all the types of people he came across and upped his quest when the Nazis started throwing their shiny weight around.

My favourite pictures of yours are of the older grounds as they evoke many memories of being there myself before they were bulldozed. From a photography standpoint, have all these modern stadia's had any impact on how you shoot?

Stuart: The old stadia have more memories. In empty grounds you can imagine every match ever played there - everyone who ever cared to attend. As stadia began to be renewed and had symmetry and spectacular features like roofs vying with the sky, I brought in my own heavy artillery - a camera in which the lens moved from side to side to capture it all. Generally though I have used the one ‘box' camera with the one lens, no light meters nor fllters and indeed no photo-shop-shopping afterward. The camera is my eyes and me. I'm the boss. Not technology. 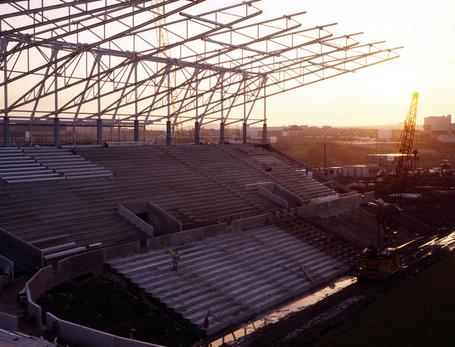 In particular are there any differences from Roker Park to the Stadium of Light?

Stuart: Roker had the nooks & crannies and for its modest size it had a heaven of a roar. Before I ever went inside I used to stay with a nurse in her terrace with the floodlights streaming through her bathroom window. I wanted some more of that. Roker had the streets and if you got high enough BEHOLD the sea! The Light has the sense of ‘we got here - to the future' and it has the river and the brick and the gates. Both grounds shared the bridge from the city centre proper. If the Light is not full it is no good. So fill it, everyone - PLEASE!

What's been your favourite picture or favourite memory from your trips to Wearside?

Stuart: Sunderland v Newcastle derbies. Plus the match in 1991 v Arsenal in the rain when Mackems were well sunk before a ball was kicked. And Arsenal were proclaimed kings. But do you know what... 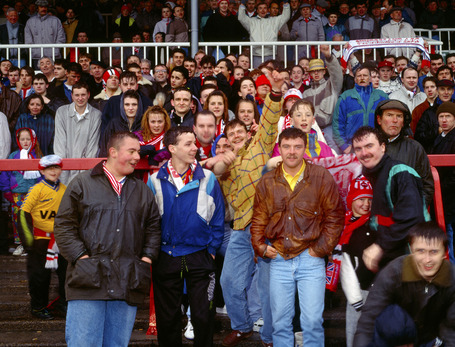 Are you in amongst this lot? - "A Shy Bunch" - Stuart Roy Clarke

The North East likes to see itself as the hot-bed of football, and you've captured some iconic images of fans in the area. Do you find that we're amongst the best places to shoot?

Stuart: Sunderland and Newcastle and Middlesbrough in that order, but only just, have more than their fair share of photos in my Homes of Football collection. On reflection it must be fair - they are all photogenic places/grounds/fans and overhauling one one ground for another on my watch has meant that I can satisfy people's hunger for what it looked like, looks like now and what it all adds up to. I will try - that's the least I can do.

Conversely has there been a team or ground you've been to shoot on numerous occasions and got nothing?

Stuart: I love going to the new Wembley but I don't expect to get much - except the action. And what if the action is crap? Nothing much to poke about one's camera in. Most club grounds always turn up something either in or beyond their hallowed turf including on the way to the ground. I like to get there early!

Obviously you'll be looking to take the best and most interesting pictures, but is there one type - player, fan or stadium - which you prefer over the others?

Stuart: If I can do YOUR football experience proud AND give a good account of myself as a photographer, then I will allow myself something to eat in the evening.

You've also kindly agreed to give away a copy of your acclaimed book Cradle Of The Game to one lucky reader. Can you tell us all about it?

Stuart: The book was borne of a feeling akin to that of +20 years ago when I began Homes of Football and the game was said to be dying and it was going to be slapped about, stripped down, and resuscitated - this time in 2010 the drama was about people finding their clubs had been sold on...no longer ours. I wanted to produce a powerful statement saying These Clubs ARE OURS and whatever you think you know and can own of a club there is always MORE.

What would you say has been your career highlight so far?

Stuart: Having negotiated the warm-up lasting 22 years, I am now thinking the real real highlight is around the corner somewhere in the next 22.

If you could shoot anything, at any time, maybe even in a fantasy, what would it be?

Stuart: Me and a beautiful Cumbrian lass having journeyed the length of the Amazon,together, winning the World Cup with our team from just down our way, and, after a bit of pushing and shoving and laughing on the edge of the jungle, inviting all the players and supporters of the other teams back to ours for cream tea and scones. Now, as for a fantasy...

Many thanks to Stuart for his time, and remember to head on over to HomesOfFootball.co.uk and pick up a piece of history from his wonderful collection.

Now then, you want to know how to win that book don't you? Simple... We want to hear your favourite Roker Park memory. Anything about the ground be it a feeling, a moment, a goal, a game. Just tell us!

To enter eave a comment either on this article, or hit us up on Twitter with the hastag #RokerComp

We will announce the winner on our Podcast set for release October 27th, so get them in by then.