"We're capable of getting a result - of course we are - but we have to play well as a team. If we sit back and defend against Arsenal, eventually they will get a chance so we can't do that. Like any big game we have to impose ourselves and get at them, and we've got players who are capable of doing so."

Above are the words of one Steve Bruce who, just last week, in the days leading up to Sunderland's trip to the Emirates Stadium, instilled in fans a belief that his side would be one that would go to Arsenal and seek to heap yet more pressure upon the nervy North London outfit.

Perhaps Bruce was being sarcastic, or soon after was struck with a bout of amnesia. Regardless of the reasoning, the above was not what came to pass yesterday lunchtime. Ridden of Nicklas Bendtner (unable to play due to being on loan from the Gunners), Bruce opted for a starting XI that was devoid of a single recognised striker. Ji Dong-Won and Connor Wickham were once again deemed only good enough for the bench, so it was Stephane Sessegnon who was left alone up front. Bruce's hugely negative 4-5-1 formation was shattered within 30 seconds, when Robin van Persie managed to find more space than Buzz Aldrin and Neil Armstrong. Seb Larsson's stunning free-kick had the Black Cats level, but it was van Persie who would seal a 2-1 home victory with a superb set-piece of his own.

At times in the early stages of the game, one could have been forgiven for thinking Sunderland had lined up in a 4-6-0 formation. The home side were utterly dominant within the opening twenty minutes or so, to the point that the Wearsiders often found themselves with all eleven players in their own half.

A big issue in this game was the crowded nature of the midfield. Arsenal employed a 4-3-3 formation, however, when they didn't have the ball (which, in fairness, was a fairly infrequent occurrence) the two wide men in the form of Theo Walcott and Gervinho would drop back. With Sunderland employing a five-man midfield, and one whereby the two wide men hardly attacked the wings with much vigour, this left the middle of the immensely overcrowded.

Unsurprisingly, this favoured the home side, due to their renowned ability to retain possession in even the tightest of spaces. Sunderland, on the other hand, proceeded to give the ball away more times than one could dare to count.

A further problem from this overcrowding (and, indeed, distinct lack of creativity from the visitors) was that the back four were left with few options in moving the ball forward. Often this resulted in a long, hopeless ball towards the tiny Sessegnon. In fairness to the lone striker, he played well and did make a nuisance of himself; many were left shaking their heads when Bruce substituted him in the second half. 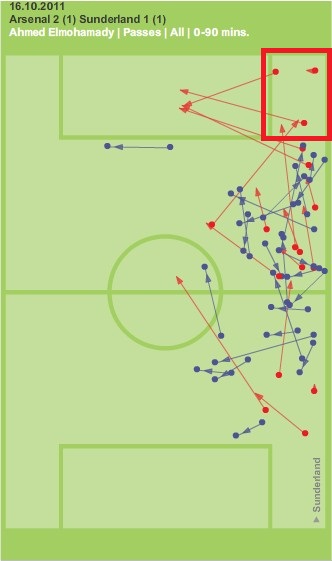 As shown above, winger Ahmed Elmohamady offered almost nothing going forward. This is becoming a worrying trend for the Black Cats, especially when we consider that much of Sunderland's play is focussed down the right side of the field (as we discussed in last week's Talking Tactics).

Whether this is down to Bruce's instructions of Elmohamady's inadequacies isn't fully clear, but the point remains that this Arsenal backline was one fraught with nerves; a winger capable of making more of an impact could have caused severe damage to the home side.

The extent of Sunderland's negativity can be seen when looking at the amount of clearances made from deep within their own penalty box. 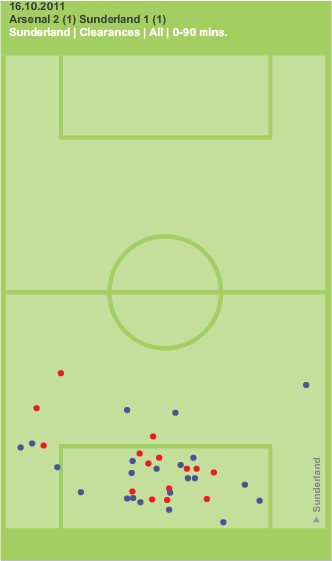 In a move a world away from Bruce's pre-match quotes, the visitors went to the Emirates and played a depressingly deep defensive line. Inevitably, and predictably, their efforts were in vain; the pressure eventually proved too much for them.

The main problem, though, was that such negativity from the manager bred indiscipline in his players. Faced with the task of enduring an onslaught, the visitors tired. As a result, they became sloppy, gave possession up even more than they already had, and inevitably conceded numerous free-kicks in dangerous areas. 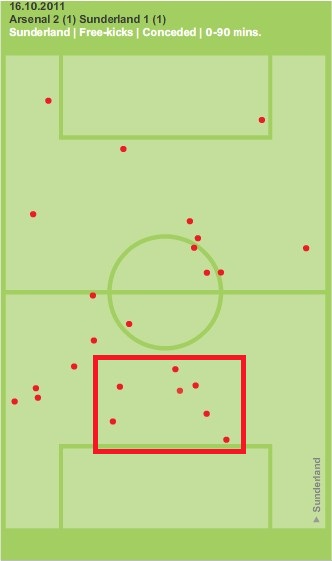 Though the Gunners would spurn a number of these set-pieces, Sunderland were eventually undone by a superb effort from Robin van Persie.

Although defeat at Arsenal, and defeat by such a slim margin particularly, is nothing be ashamed of, this game threw up yet more worrying examples of the Steve Bruce management mantra.

Firstly, his negativity meant the visitors were up against it before the clock had even reached the one minute mark. It is true that the defending for the first goal was lax at best, but it must be remembered that the move stemmed from Sunderland giving away possession by hoofing the ball aimlessly forward; a direct consequence of the way the manager had set his team up.

Furthermore, it was baffling that he allowed such negativity to continue after the break. Following Seb Larsson's superb free-kick, Sunderland enjoyed a period of intense pressure; only a staggering save from Wojciech Szczesny kept out Lee Cattermole's point blank header, while Jack Colback fired an effort mere inches over the bar. Then, with half-time coming as a much welcomed break for Arsene Wenger's men, Bruce sent his own side back out with the same remit that had failed at the start of the first half.

In addition, his substitutions (when they eventually arrive), continue to infuriate and confuse in equal measure. Yesterday he took off Seb Larsson and Stephane Sessegnon – arguably the visitors' two best players. Ji Dong-Won came on only to find himself thrust onto the left wing vacated by Larsson, while one feels that Connor Wickham's introduction once again came too late for the youngster to make any sort of genuine impact.

It is not nice to tear into a manager quite like this, but Bruce keeps leaving people little other choice. Next week's game at Bolton Wanderers is now, officially, 'massive'. Three points should be well within Sunderland's grasp but the manager's comments post-Arsenal, that his side have only played badly once this season, suggests he is rapidly losing both realism and control of the situation at the Stadium of Light.