Talking Tactics: Some Points From Our First Seven Games

Share All sharing options for: Talking Tactics: Some Points From Our First Seven Games

The lull in domestic proceedings brought on by a weekend interrupted by international games offers us the perfect chance for a look at Sunderland's tactics as a whole over their opening seven Premier League games.

With only one win garnered from these fixtures, alongside three draws and three defeats, it will come as no surprise that much of this piece shall be devoted to where things have gone wrong for Steve Bruce's men.

At the start of the season, Bruce could perhaps have been forgiven for thinking he had little to worry about when considering the middle of his midfield. Boasting relative quality and depth here, the Black Cats looked to have solidified (and indeed, strengthened) a pivotal part of any football team.

Alas, this has thus far not been the case; the trends emanating from the middle of the park are hardly ones that will brighten the gloom currently overhanging the managerial staff.

Firstly, there is Craig Gardner. Bought on the back of a profitable season in front of goal for Birmingham City last year, Gardner was expected to provide a much needed attacking threat from midfield.

However, such a threat has not materialised. Gardner has claimed one goal (in the 4-0 demolition of Stoke City) but, other than that, he has looked remarkably absent – not exactly the best of attributes for a man who, by the nature of his position, should be one of the most involved players in the game.

A look at the statistics shows up some worrying figures for Gardner. Whilst he has contributed an average of 2.5 shots per game so far, third behind only Asamoah Gyan and Stephane Sessegnon. Of course though, only one of these 15 shots was successful – and that required a hefty deflection. Of his 14 other attempts, only 4 have been on target.

Gardner's arrival on Wearside came following the departure of Jordan Henderson, a man many Sunderland fans felt was vastly overrated and offered little to the side. 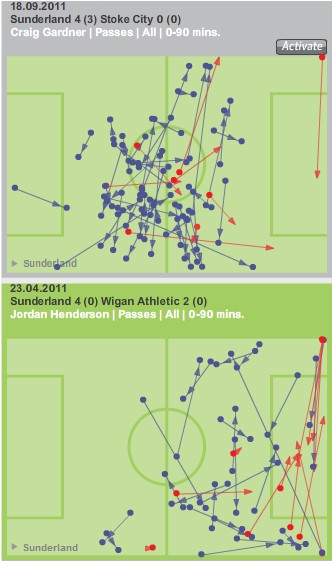 However, as shown in the above chalkboard, it would seem so far that Sunderland may have took a step backwards. Obviously this comes with a caveat - £20m for Henderson was a fantastic deal, and one the club would have been foolish to turn down.

But this doesn't take away from the difference it has made to the team. A look at the above chalkboard shows that, far from living up to his hype as an attacking threat, much of Gardner's activity takes place in less advanced positions.

It is difficult to compare the players between two separate games, however in choosing Stoke this season and Wigan at home last April, it can at least be agreed that both games were ones where Sunderland attacked for long periods, and thus a wealth of attacking opportunities were available to their midfielders. As shown, Henderson (who took that Wigan game by the scruff of the neck) seems far more of a threat than his successor.

If Gardner isn't scoring goals, perhaps he is setting them up? Again though, he is found wanting. The former Birmingham man has contributed a paltry average of 0.3 key passes per game (where 'key passes' are defined as those that directly set up an opportunity in an advanced position in the opponent's half), a figure which puts him on a par with Ji Dong-Won, who has featured only sparingly as a substitute in six games, and John O'Shea, a defender.

The problem in the middle is the Gardner seems much too similar to the man that has often lined up alongside him as captain, Lee Cattermole. This, in essence, means the side has almost zero creativity coming from the centre of midfield, and thus there is an over-reliance on both the two wide men and Stephane Sessegnon. This in itself causes further problems when going forward; Sessegnon's need to come deep and forage for the ball leaves any striker ahead of him isolated.

Another issue with Sunderland's central midfield is indiscipline. Cattermole's problems with referees are well-documented, but that it in no way hides the fact that his frequent bookings detract greatly from his ability to add something positive to the Wearsiders' cause. The captain leads the way with 2.2 fouls per game, swiftly followed by Gardner on 1.7.

Initially, this statistic could be seen as helpful: in causing fouls, the central midfielders could be breaking down opposition attacks high up the field, and giving the side more time to defend. However, as shown, Cattermole and Gardner's activity takes place in deep positions, and thus they end up conceding free-kicks in dangerous positions. Combined with Sunderland's penchant for defending set-pieces badly, this doesn't make a good combination.

Reliance on the right

An interesting aspect thrown up from Sunderland's opening games has been their reliance on moving forward with the ball primarily on the right side of the field. 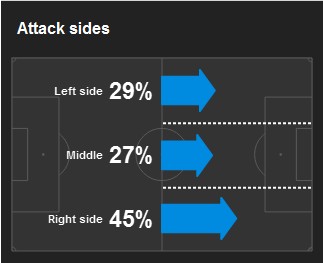 As shown, the Black Cats focus almost half of all their play down the right. This is backed up by how John O'Shea, now established as first choice right-back, has averaged a lofty 54.5 passes per game in his four appearances – far more than anyone else in the squad.

Problematically, O'Shea also boasts the worst passing success rate of any outfield players – 69%. This is not necessarily the Irishman's fault, as often he is given poor options by those in front of him.

All of this, however, points to the fact that the Black Cats are fairly easy to defend against. In focussing much of their play down one side of the field, Sunderland gift their opponents a head start before a ball is kicked; opposing sides are already alert to the fact that Steve Bruce's men have extremely limited options on the left-side of the field, with Seb Larsson, a right-footed player, often taking up position there.

Furthermore, such activity on the right requires Ahmed Elmohamady to be effective at getting balls into the area. 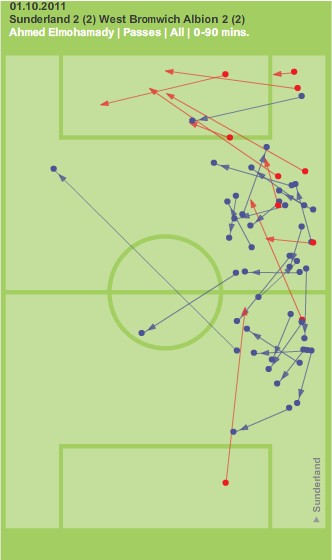 As shown though, using the example of last week's encounter at home to West Brom, he is rarely successful at finding a man in a red and white shirt when it comes to the final third. The Egyptian is currently averaging just a single key pass per game.

Linked intrinsically to Sunderland's early season woes has been a lack of effective supply to the front line. As stated earlier, the weakness in the centre of midfield has a deep impact on this, but there are other factors too.

The main one seems to be that, too often, the supply given is of the wrong sort. Nicklas Bendtner, he of Arsenal stock, has often found himself competing for high balls while in a Sunderland shirt – a tactic his game is hardly suited to.

Despite being a lofty six feet five inches tall, the Dane is much better with the ball at his feet (as he showed in the West Brom game). Indeed, he has been successful in just 39% of his aerial battles thus far this season. This is not only a reflection on him, but his teammates also; often, Bendtner finds himself crowded out by opposing defenders.

As a result, it seems clear that some sort of change must be made; either in tactics, personnel, or both. Regarding the first, if the side is to remain as it is currently, with Cattermole and Gardner in the middle, it seems logical that Steve Bruce should stress the importance of keeping the ball on the floor, and building up the play from there.

This starts at the back. All too often, Simon Mignolet is given little option but to launch a long, hopeful ball forward. Given Sunderland's poor success rate in the air (at least amongst their midfielders and strikers), this inevitably just invites pressure from their opponents.

If Bruce is willing to change the personnel of the side, there are two changes that could be extremely beneficial to the Black Cats.

Firstly, David Vaughan must surely be given a permanent starting berth (perhaps he already has been, his absence from the side against West Brom was down to illness, not a tactical decision). Vaughan was integral in the campaigns sole victory against Stoke, a point I discussed in our tactics piece on that game, with him contributing equally well when defending and attacking.

The second change that could benefit the side is giving young Connor Wickham a chance to shine. Wickham, though his appearances have been limited, has looked a threat when he has been on the field. Furthermore, unlike Bendtner, he is hugely successful in the air – his success in 75% of his aerial battles thus far is the squad's highest. Bruce could well benefit from playing Wickham alongside the man from Denmark, and dropping the up-and-down Elmohamady, with Sessegnon taking up residence on the wing.

Graphics and statistics taken from WhoScored and The Guardian