Share All sharing options for: Talking Tactics: SAFC 0-2 Everton (A)

After a weeks hiatus, our man Chris Weatherspoon returns with Talking Tactics and to give the defeat to Everton a once over. It's fair to say that the problem against Everton was that everyone was crap, but Chris's tactical eye has made some excellent observations this week...

Though previous encounters against Chelsea, Stoke and Tottenham had all ended in defeat, Sunderland and boss Steve Bruce could at least take positives from those games. The same cannot be said for Saturday's trip to Goodison Park, where a 0-2 defeat to Everton was little more than the visitors deserved.

David Moyes was without Tim Cahill, a perennial thorn in Sunderland's side, but welcomed back Louis Saha in his stead, the Frenchman having scored four against Blackpool earlier this month. As a result, the Toffees lined up in a relatively flexible 4-4-2 formation. Jermaine Beckford, scorer of both goals, partnered Saha up front, whilst Seamus Coleman, Mikel Arteta, Leon Osman and Marouane Fellaini offered a wealth of creativity in midfield.

Sunderland stuck with their now favoured 4-5-1 formation, but made three changes to the side that lost at home to Spurs two weeks prior. Craig Gordon, apparently injured, made way for Simon Mignolet in goal, whilst Nedum Onuoha's training ground knock ruled him out, Anton Ferdinand his replacement. The front six was not disrupted by injury, but Bruce decided to go with Ahmed Elmohamady on the right wing, with Steed Malbranque dropping to the bench.

Those without short memories may recall that much of Everton's successful play in their 2-2 draw at the Stadium of Light in November came down the left, and Saturday's victory saw great similarities. Much of this was once again instigated by the excellent Leighton Baines at left-back, who performed solidly in defence and frequently offered another option going forwards. 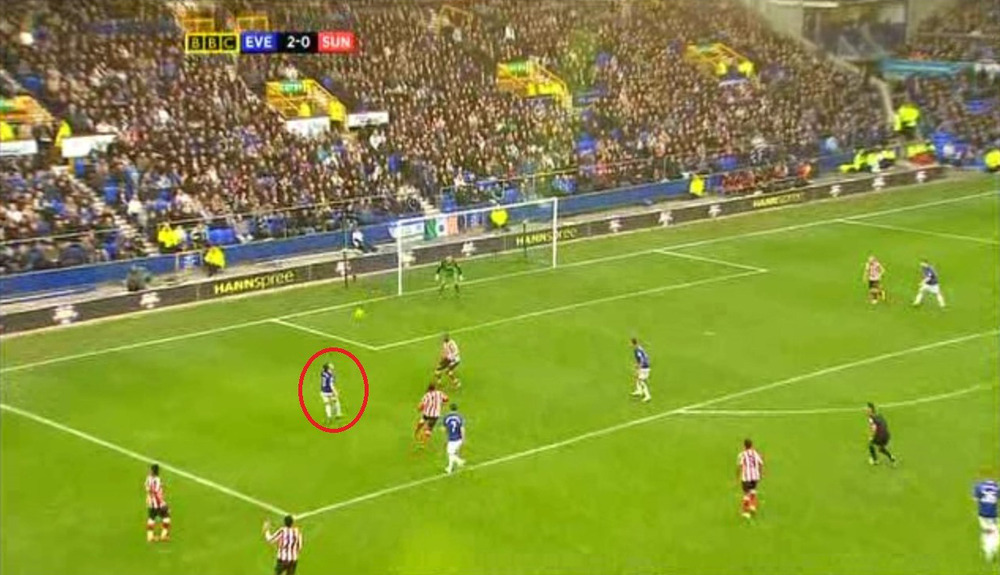 In the example shown, even when his side were comfortable at 2-0 and not needing to find a goal, Baines is almost Everton's furthest man forward. His constant movement into the final third negated the threat of Elmohamady, who had a poor game anyway, and provided the home side with an extra man when attacking. Though many of Baines' passes in that final third were actually unsuccessful, the fact he was taking up such positions was a huge asset to David Moyes' side. In addition, his ability to get back into position quickly meant that Sunderland, whose midfield play was too slow and unadventurous to do any real damage, were unable to take advantage of any space Baines may
left behind him when Everton lost the ball.

The news this week that Michael Turner will miss the rest of the season was a quite crushing blow for Steve Bruce, especially after the performance of his two centre-halves at the weekend. John Mensah, when fit, and Titus Bramble have both had excellent seasons thus far, but they would do well to forget their performances on Saturday.

Though not helped by their full-backs too much, Anton Ferdinand having a particularly bad game, Mensah and captain Bramble all too often found themselves dragged apart from each other, leaving huge gaps of space in the middle for Everton to exploit. 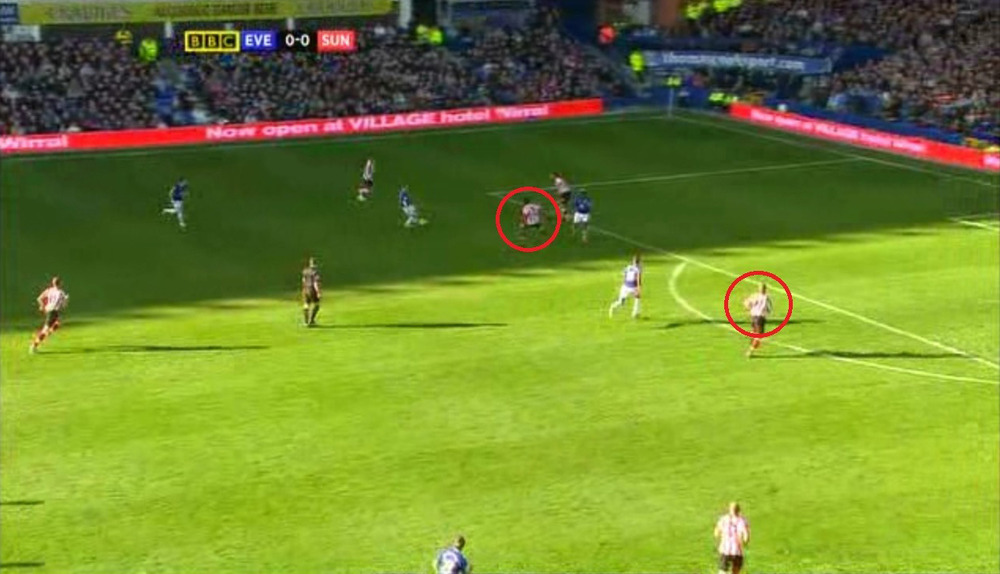 As shown here for Beckford's first goal, Mensah allowed Louis Saha to drag him wide. Whilst this was unnecessary in itself, had Titus Bramble been closer to Beckford, the goal would have been a lot harder to come by. As it was, the Everton frontman was given far too much time and room, and promptly put his side one up.

Similar issues were in evidence for the second goal. Mensah again moved out to the wide area of his 18-yard box, missing a vital tackle on Mikel Arteta. And, once again, Bramble switched off, allowing Beckford to move off him and find space to make it 2-0.

Though it is wrong to point at the two central defenders as the fall guys in a game where not one Sunderland player performed well, it was their lack of concentration and mistakes that led directly to the two match-winning goals.

A common feature of recent 'Talking Tactics' articles has been the mention that lone Sunderland striker Asamoah Gyan was either left too isolated by his team-mates or individually poor in his target man role. Unfortunately, the Everton game bore witness to this once more. 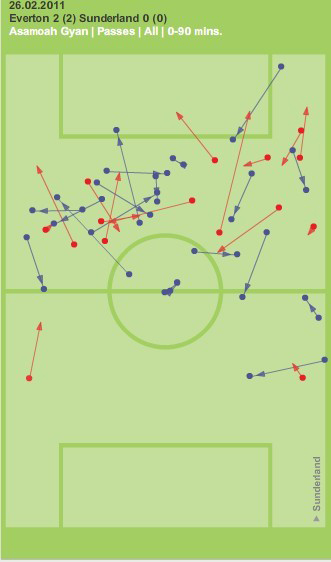 Gyan gave away the ball with almost half of his passes (15 out of 34), and rarely produced anything above ordinary. More frustratingly, he seemed intent on trying fancy flicks throughout; all well and good when they work, but Saturday saw his efforts bear little fruit.

It is telling that one of the few times Gyan did his job well, Sunderland produced their sole worthwhile effort in the game. The Ghanaian ran wide and in the process dragged two Everton defenders with him, before playing the ball backwards in a move that ended with Stephane Sessegnon rattling the home side's crossbar.

In truth, these specifics are only contributory factors to a wider issue afflicting Sunderland at the moment. Faced with a devilishly tough run of games, and a mounting injury list, the side is one that is beginning to look a little devoid of confidence – something which hadn't been the case in previous defeats.

The loss to Everton saw poor performances across the board. As discussed, the centre-half pairing of Mensah and Bramble seemed errant and lacking understanding, whilst the midfield never settled into the game and offered little attacking threat.

Most worrying about recent results is the amount of goals conceded: now eleven in the last four games. From a side that had earlier in the season seen an abundance of clean sheets, this is a concerning downward trend. Chief amongst the current problems is the lack of grit in midfield to stop the opposition creating chances. Of the 35 tackles that took place in the Sunderland half on Saturday, the Black Cats won scarcely over half of them (18) and this was a key reason as to why Everton were able to spend much of the game in opposition territory.

Roker Report is moving and changing. Please read this to see what's going on - CLICK