Saturday evening sees seventh welcome fifth as Tottenham Hotspur make the long journey north to the Stadium of Light. Last season the Black Cats ran out deserved 3-1 winners, and, with Spurs no doubt keeping one eye on their midweek Champions League tussle in Milan, Steve Bruce's Sunderland can go into this game with every confidence of taking maximum points from the 106th game between the two sides.

Here on Roker Report we decided to have a look at what Harry Redknapp's side might offer on their trip to Wearside, based on their performances so far this season. In addition, we offer suggestions as to how the Black Cats might combat such threats in their bid to secure their tenth league victory of the season.

Emphasis on the left

Earlier this season, Sunderland travelled to White Hart Lane whilst the English media worked itself into a continued frenzy over Gareth Bale. Unsurprisingly, with the young Welshman in the form of his life, much of Spurs' attacking play came down their left. 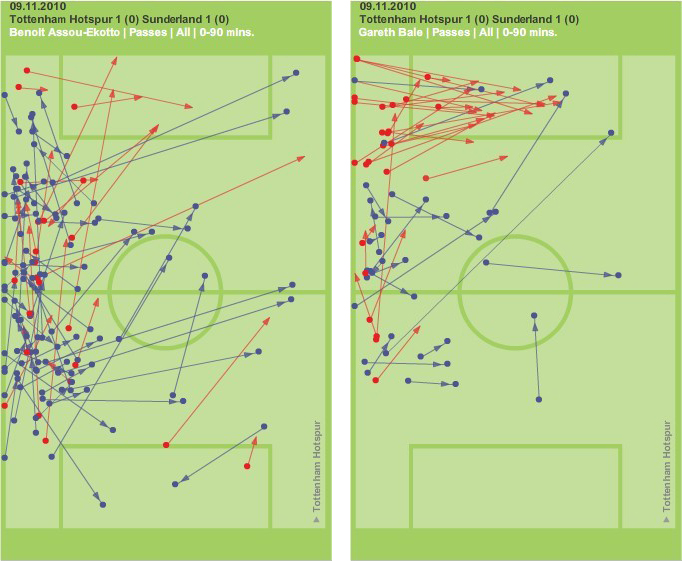 However, Nedum Onuoha defended very well against Bale last November, with hardly any of his passes into the box proving successful. Instead, what is striking about the two chalkboards above is how much of the ball left-back Benoit Assou-Ekotto was afforded. This has been a constant theme throughout Tottenham's season, with them refraining from long balls as often as possible, instead seeking to start attacks from the full-back positions.

Bale remains an injury doubt for Saturday, and Harry Redknapp will be reluctant to risk him in lieu of their imminent trip to the San Siro. But, should Bale miss out, Sunderland would be unwise to change their no doubt intended game plan of stopping the ball coming from wide areas. Spurs particularly look to get the ball down the left, even when Bale doesn't play, as Assou-Ekotto looks to get forward at any possible opportunity. Indeed, their late winner against Bolton last weekend came from a move started by the man from Cameroon.

For all their attacking flair, a well-kept secret of Redknapp's side's success thus far has came in the form of a stern defensive line. 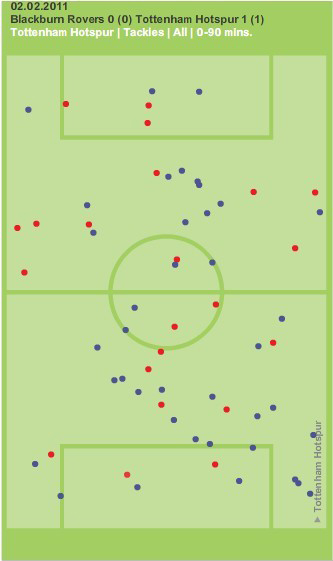 In their last away trip, a 1-0 win at Blackburn, hardly the easiest ground to visit, the foundation for victory was laid in their refusal to let the opposition through. With attacking players Jermain Defoe, Peter Crouch and Rafael van der Vaart all starting, Redknapp opted for the defensive-minded Wilson Palacios and Jermaine Jenas in central midfield to give his side greater balance. The plan worked; the Tottenham rearguard blocked 33% of Rovers' total tally of shots, and were successful with almost 80% of tackles in their defensive third of the field.

Spurs have conceded just 27 goals in the league this year, level with Arsenal and beaten only by the other three sides in the top five. With Sunderland limited to fielding Asamoah Gyan as their sole striker, much will rely on the Ghanaian's strength and ability to hold the ball up. Though, if Gyan is able to bring the likes of Sessegnon and Richardson into play, the home side could cause problems – though the majority didn't trouble the Tottenham goalkeeper, Blackburn amassed 18 shots in the recent tie at Ewood Park.

In last season's game, Sunderland's success came in that they emulated the style Tottenham frequently look to employ. Focusing on short, sharp passing, whilst attempting to play at a high tempo and press continuously when without the ball, the hosts never allowed Redknapp's men to settle, and looked well worth their victory.

Though still inconsistent on the road, Spurs this season seem much less inclined to allow the opposing home side to dictate the play as they did in this fixture last season. Much of this owes to Luka Modric and Rafael van der Vaart. However, following recent injuries and the aforementioned Champions League tie, it looks like these two men will miss out – something which could be key if Sunderland are to win this tie. 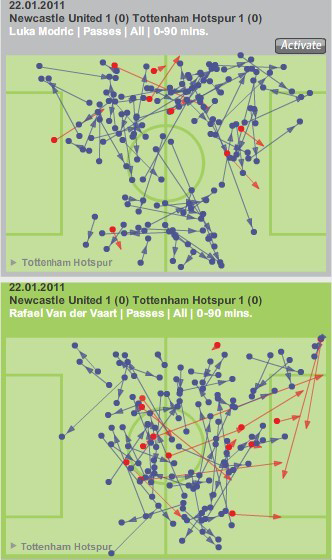 If they are to miss out, Redknapp's options in midfield, though in no way poor, will be much more limited in an attacking sense. With Modric unlikely to return, the more defensive Jenas and Palacios will likely retain their places. Niko Kranjcar is likely to get the nod ahead of van der Vaart after his late winner last weekend, but it must be said that the Croat is unlikely to roam quite as much as Tottenham's two star players. In the chalkboard above is shown their movement in the recent trip to Newcastle. Even in a game where Spurs were fortunate to get a late draw, Modric and van der Vaart were influential, rarely wasting the ball and taking up positions all over the pitch.

Provided they do miss out, it can only be helpful to a Sunderland side still without any of its designated ball-winning midfielders. If Kranjcar does play, it is likely he will line up on the opposite flank to Aaron Lennon. In this case, Sunderland will be able to focus their efforts on stopping the ball coming in from wide areas, from where Spurs will look to hit the head of Peter Crouch (or, if he starts in his stead, Roman Pavlyuchenko).

The absence of their two main flair players could hinder the away side into only attacking down the wings. Palacios and Jenas are unlikely to push forward much through the middle. In turn, this will aid Sunderland further; Sulley Muntari will be given ample room to show off the wide range of passing he possesses, something which was shown in the 'Talking Tactics' article that analysed last week's visit to Stoke.

Even without Modric and van der Vaart, Tottenham will arrive at the Stadium of Light confident they can return to London with three points. Sunderland's midfielders will need to support Asamoah Gyan well if they are to get past one of the league's toughest defences, and the Ghanaian will have to be at his best to fend off the formidable partnership of Michael Dawson and William Gallas.

In addition, the Black Cats can expect much of the Spurs attacks to come down the wings. Last week at Stoke, Nedum Onuoha and Phil Bardsley enjoyed success when they pushed higher up the field to stop the Potters' wingers advancing forward, so they may have to replicate this on this weekend.

Finally, Sunderland's best chance of winning this game would be if they choose to employ the tactics they did last April in that 3-1 win. They did this in the second half of their visit to Tottenham last November, to good effect. In the opening 45 at White Hart Lane Spurs were well on top, but when Steve Bruce's men upped the tempo and focused on incisive passing they ended up unfortunate not to come away with a win.

Whatever happens, Saturday evening television viewers are likely to see an entertaining match-up.

Statistics and graphs taken from Guardian Chalkboards and theStatCat

For more Spurs build-up, why not check out our own preview with injury news and predictions, or check out the views of our Spurs fan in this weeks Fan Focus.