Roker Report's tactical expert, Chris Weatherspoon (who you can find on Twitter @christoph_21), takes us deeper into Saturday's lunctime defeat to Stoke City...

Sunderland's march towards Europe hit another blip on Saturday, coming under sustained aerial bombardment in the Potteries. Stoke, not known for their intricate football, conformed to stereotype. Sunderland, not known for their proficiency when defending set pieces, did likewise. Three goals from three set plays will madden Steve Bruce, and with two of them coming in the final ten minutes, defeat was well and truly snatched from the jaws of victory.

The hosts lined up in a rather rigid 4-4-2. Sporting a flat back four, they looked to either spray the ball wide to wingers Pennant and Etherington, or simply aim for the height of new signing John Carew and ex-Black Cat Kenwyne Jones upfront. Jones was, for the first half at least, employed a little deeper than Carew, looking to move the ball to the wings and then move onto any crosses into the box that followed.

The visitors took heed of Kenny Dalglish's tactics for Liverpool against Stoke in mid-week, fielding three centre-backs, with John Mensah replacing Steed Malbranque. Nedum Onuoha and Phil Bardsley were employed as wing-backs, whilst Sulley Muntari made his debut in a holding role, Elmohamady the other casualty demoted to the bench. Asamoah Gyan continued on his own up front, with Sessegnon and Richardson taking it in turns to play off him.

Sunderland completely dominated the early stages of this encounter and, despite the eventual result, played all of the football in this match. Stoke's central midfield partnership of Rory Delap and Dean Whitehead is one particularly lacking in terms of creativity, so the Potters' decision to completely bypass the middle came as little surprise. 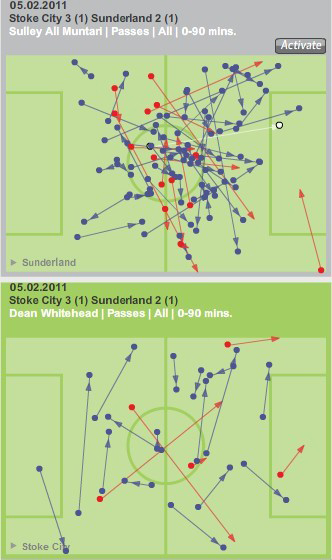 For Sunderland, this played into their hands. In the first 25 minutes of each half, the periods of the game they controlled quite comfortably, they were able to get the ball down on the ground and keep it, often seeking to go through the middle. The chalkboard above displays the difference between the teams' central midfielders. Sulley Muntari attempted almost three times as many passes as opposite number Whitehead (61 compared to 21), and the Sunderland man's passes were considerably shorter in range, combining with Jordan Henderson and Kieran Richardson to create openings. The débutante Ghanaian was successful with over 75% of his attempts to find teammates, and assisted countryman Asamoah Gyan's goal that put them 2-1 up; all this adds up to suggest Steve Bruce has acquired signed a top quality defensive midfielder.

Whitehead, just like his partner Delap, looked to either move the ball on as quickly as possible to Carew and Jones, or to send it wide to the wingers. Where Sunderland did well was in their ability to negate the usefulness of this sending the ball to wide areas. As shown, very few of Whitehead's passes out wide found either Etherington or Pennant in the final third of the field. This was down to Steve Bruce's wise decision to push his wing-backs forward, which will be discussed in more detail later.

Also key to the visitors controlling the midfield was the role played by Stephane Sessegnon. Sessegnon was able to neatly exploit the rigidity of Stoke's system; as shown here, he has managed to slip in between the two central midfielders and the opposition back line. 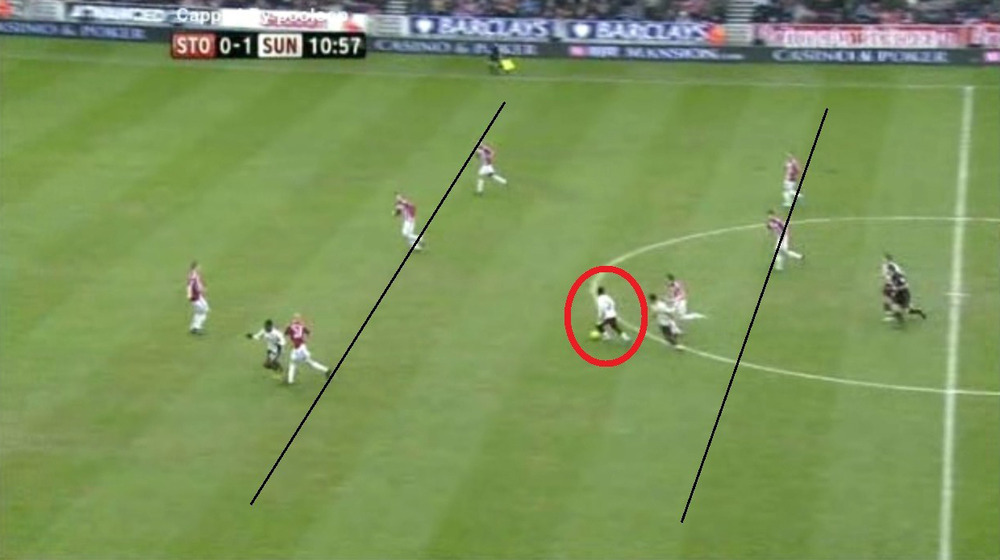 When given this space, Sessegnon was effective, finding a team-mate with 31 out of his 38 passes overall. In the opening encounters, his ability to get between the two banks of four left Stoke chasing the ball a lot. Sessegnon's combinations with Gyan, who was for the most part excellent as a hold-up man, helped bring the other Sunderland midfielders into the game.

Sessegnon was a potent threat throughout, probably Sunderland's man of the match, and Steve Bruce had every right to feel aggrieved when the Benin international was fouled in the build-up to Stoke's second equaliser and no free-kick was forthcoming, having again found space between Stoke's defence and attack. After about 20 minutes of the first half, Stoke realised Sessegnon's impact, and Rory Delap dropped deeper to combat it. Despite this, Sunderland's January arrival was excellent and, when they managed to get the ball down from Stoke's relentless hoofs forward, much of their attacking play went through the man signed from PSG.

Look at Jonathan Walters' statistics from this game and you could be forgiven for thinking his introduction had little impact on its outcome. However, it was Tony Pulis' decision to introduce the ex-Ipswich Town striker that changed the momentum of the game, and ultimately saw his team run out winners. 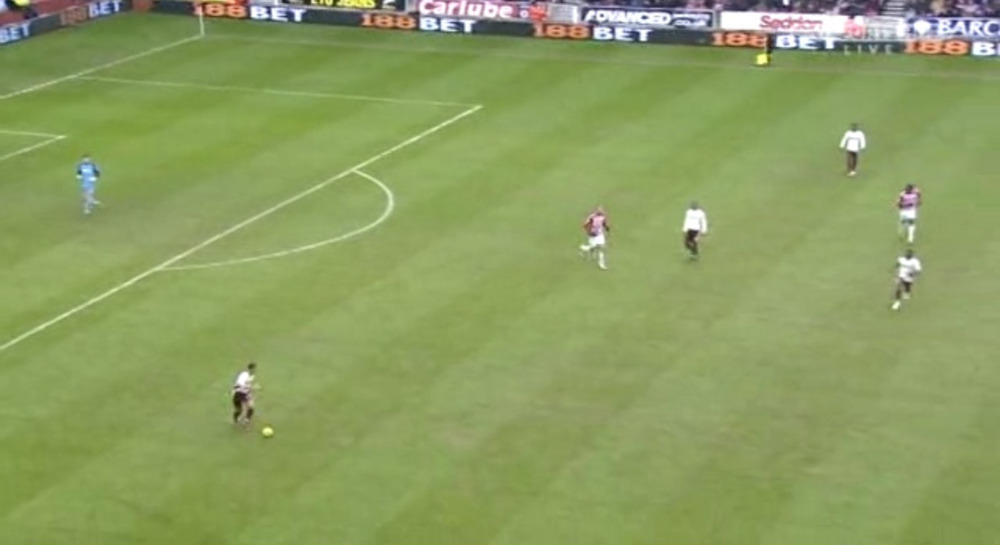 As shown here, prior to Walters' introduction, strikers Carew and Jones were outnumbered by the three Sunderland centre-backs. This allowed the visitors to control the game; with Stoke intent on pumping long balls forward, any loose balls inevitably fell to the spare Sunderland defender, or could be moved to him safely (in this case, Anton Ferdinand is free).

In turn, Onuoha and Bardsley had clearly been given strict instructions at half-time to play further up the field. This had proved effective in the opening stages of the first half, disabling Etherington and Pennant from getting into crossing positions. When they allowed the Stoke wingers to get forward, the hosts inevitably dictated the pace of the game. So, until Walters came off the bench, the Sunderland full-backs, safe in the knowledge that their fellow defenders had a numerical advantage over the Stoke forward line, were able to push forward and stop a huge part of the Tony Pulis' gameplan. 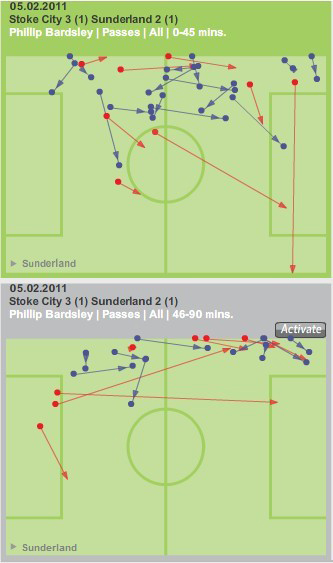 Bardsley's chalkboard highlights this perfectly. Though there were times in the first half when he got forward, most notably for the opening goal, he too often found himself in his own half. Hence, the opposing Etherington was able to push on, and act as an outlet. In the second half, the chalkboard shows how Bardsley's activity frequently came much higher up the pitch, well into the Stoke half. This explains how Sunderland were comfortable in the second half, up to the point Walters arrived.

Walters coming on changed things in that it now left Bardsley and Onuoha wary of leaving their team-mates 3-on-3 at the back. With Sunderland only playing Gyan up front, Tony Pulis could allow himself to remove a defender in Andy Wilkinson. Now, the pendulum swung back towards the home side. Though still continuing with long ball tactics, they once more had people on the wings to receive them due to Onuoha and Bardsley dropping back again. 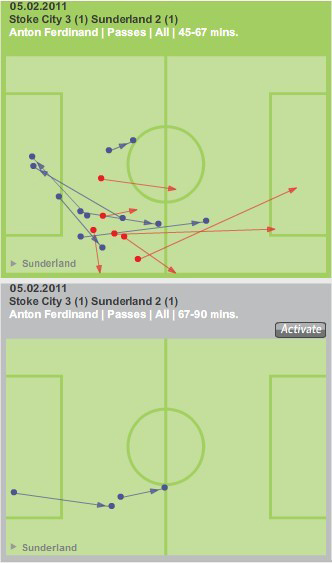 Anton Ferdinand's second half chalkboard highlights just how Walters' presence changed the game. In the minutes between the interval and the substitution, Ferdinand frequently picked up the loose ball, usually managing to find a team-mate with a pass and allow Sunderland to attack. However, when the numbers were evened up by the change in the 67th minute, Ferdinand was able to pass the ball only twice. Instead, Sunderland often resorted to long clearances. With Gyan up front alone against a tall, strong defensive line, the ball constantly returned to the Sunderland half. This
pressure resulted in a number of corners and set-pieces, the exact scenarios the Stoke goals came from.

Footballing-wise, the better side lost. Stoke did little to change the common perception of them as a long ball side, and it ultimately paid off for them. Sunderland's defending on set-pieces has to be called into question, with Stoke's goals coming from a combined distance of about six yards. However, being given little protection by the referee and hampered by some highly contentious offside decisions did little to aid the cause of the Black Cats.

The away side dominated the midfield when given the opportunity to keep the ball on the floor, with Muntari and Sessegnon particularly standing out. Sunderland looked very comfortable on the ball and their intricate passing was unfortunate not to create more clear-cut chances at times.

Even though it eventually wore them down, they also coped quite well with the aerial tactics of Stoke. Even when Walters came on, the home side struggled to create anything from open play. Instead, their pressure led to corners, free-kicks and long Delap throws which, for the most part, Craig Gordon and his defence coped with admirably. Unfortunately though, the sheer volume of set plays meant that when they did switch off or make mistakes, they were punished, and made the trip home empty handed.