Welcoming a new section to Roker Report, which I'm sure you'll find highly interesting and informative, Chris Weatherspoon breaks down what went wrong, or indeed right tactically in each SAFC game. It's our own little version of Zonal Marking basically. Enjoy!

Anelka The Architect As Chelsea Wreak Revenge On Wearside

Carlo Ancelotti secured his second victory in as many visits to the Stadium of Light on Tuesday evening, as Chelsea turned on the style to overcome a Sunderland side that humiliated the Blues at Stamford Bridge in November. When Phil Bardsley fired the home team ahead within five minutes, Black Cats' fans hoped a repeat of last autumn's demolition of the champions was on the cards. As it was, Chelsea responded admirably, with goals apiece from Frank Lampard, Salomon Kalou, John Terry and Nicolas Anelka sealing a 4-2 win.

Sunderland enjoyed their most successful periods of the game in the first half, when they replicated their tactics of November at Stamford Bridge. Closing down quickly when without the ball and playing quick, neat triangles when in possession has given Sunderland the most joy this season, and that was again shown in the opening half hour or so on Tuesday evening. 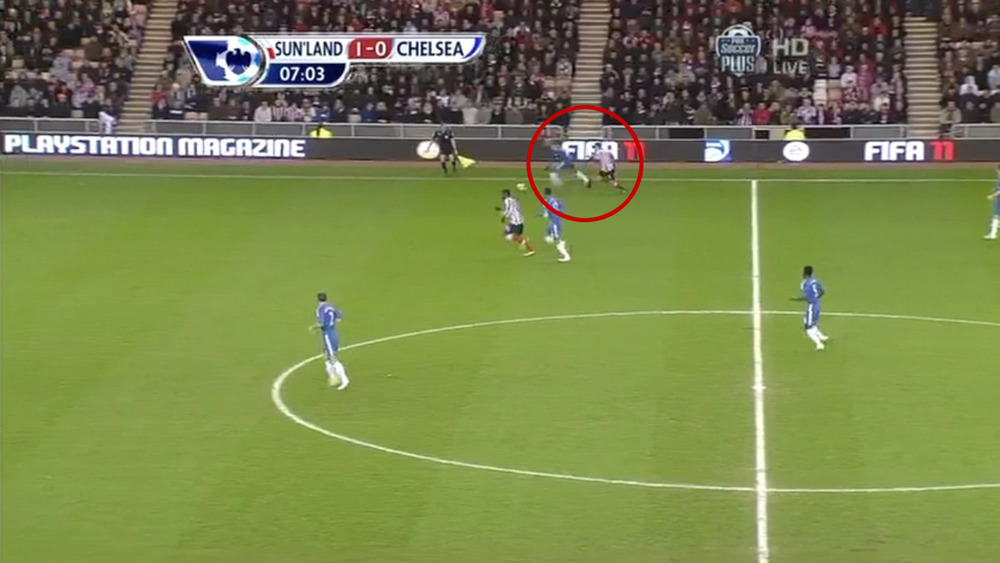 Here, Steed Malbranque has hassled Nicolas Anelka to the point that the Chelsea star has retreated a full 20 yards, back into his own half. At times Chelsea struggled to deal with Sunderland's pace and aggression when chasing the ball; Kieran Richardson notably outpaced a worried looking John Terry on two occasions.

Of course, no team could keep up such intensity for an entire game, especially against a side of Chelsea's quality. Hence, when Sunderland did ease off, mainly in the second half, they found themselves squeezed up the pitch into their own half, and unable to replicate the game plan they'd started the match with.

Whilst it was a Sunderland full-back who got his name on the score-sheet, pivotal factors in Chelsea's victory were the performances of their two wide defenders. In Bosingwa and Ashley Cole they have two immensely fit wing-backs, who offer as much going forward as they do when defending. 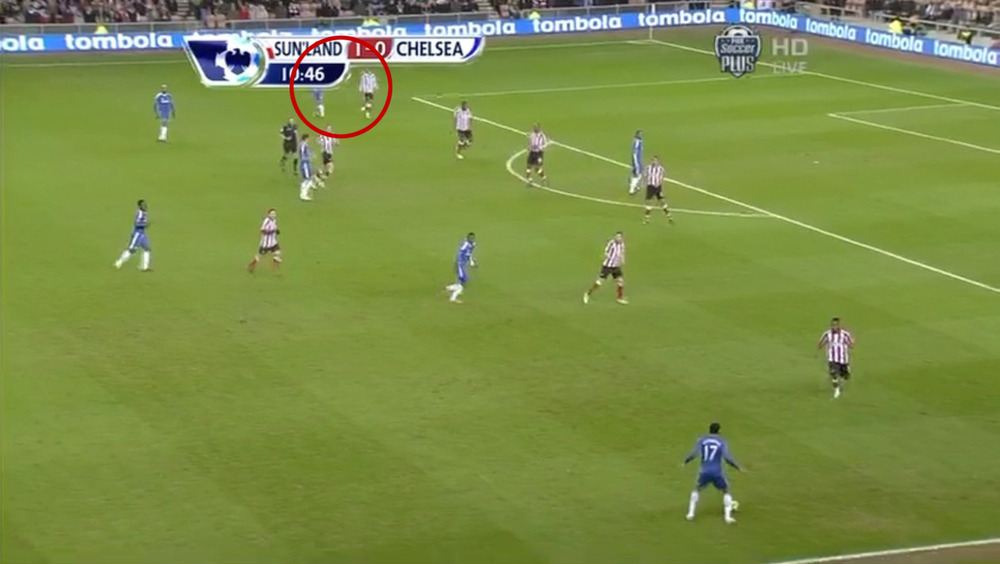 Here, Cole (partially obscured by the score-line) is, with the exception of striker Didier Drogba, positioned higher up the field than any other Chelsea player. With only one opposing striker to worry about, Cole need not retreat when the ball goes wide to right-back Bosingwa, as he is safe in the knowledge that centre-backs Ivanovic and Terry could mark Asamoah Gyan, while John Obi Mikel also stayed back, waiting to smother any potential counter-attack.

Indeed, such work by Cole led to the Chelsea equaliser, as he was clumsily fouled in the box by the backtracking Elmohamady. One way for Sunderland to negate this tactic would have been to play higher up the field, with their wingers pushing out in an attempt to get the Chelsea full-backs to follow them. However, given the standard of the opposition, it is unsurprising that Steve Bruce's side were reluctant to push too far and leave huge gaps for fast players to potentially exploit.

A direct by-product of such attack-minded opposing full-backs was that Sunderland's own abilities going forward were severely weakened. With Bosingwa and Cole so determined to get forward at every opportunity, this left Ahmed Elmohamady and Stephane Sessegnon having to focus a lot of their time on defensive duties. 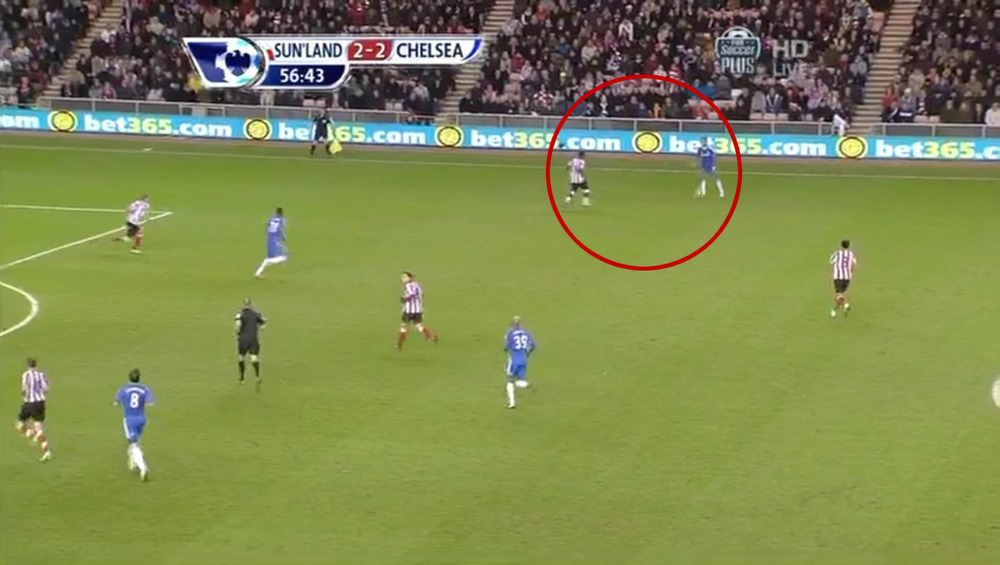 Here again, we can see that Bosingwa is in a position more familiar to that of a right-winger. Sessegnon, who did display an ability to hold players up well and stop crosses into the area, is nevertheless forced to retreat into his own half. This meant that, even if Sunderland did seize possession, they had very few options in the way of an attacking outlet.

Particularly in the second half, Chelsea played a very high defensive line, to the point that John Terry was a regular trespasser into Sunderland's half. When the Blues did lose the ball, Sunderland's wingers were too deep to be deemed worthy of a purposeful pass, so the ball inevitably went long towards Gyan. With Kieran Richardson often pre-occupied with tracking runners from midfield, and hence distanced from his side's only striker, the Ghanaian frontman fought a losing battle against Ivanovic and Terry, and the Black Cats never looked like scoring after the half-time.

With the arrival of Fernando Torres in West London, Nicolas Anelka may have wondered whether or not there remained a role for him at Stamford Bridge. Following Tuesday's man-of-the-match performance, the Frenchman staked his claim for a much deeper position than we are used to seeing him perform in. Picking the ball up deep and turning, Anelka rarely misplaced a pass, bringing the aforementioned Cole and Bosingwa into the game before making his own ventures forward towards the opposing penalty area. 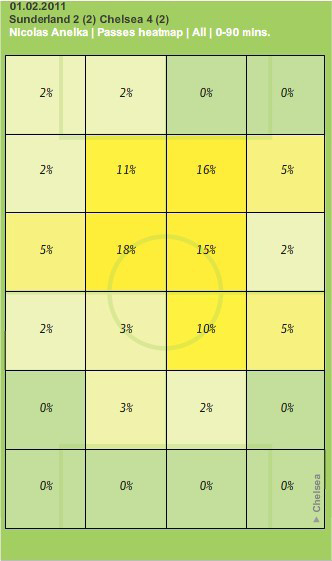 As Anelka's heatmap shows, much of his activity came in and around the centre circle. In the first half, when the match was more open, each side's desire to counter quickly negated the Blues' ability to dictate the game (indeed, in one five minute period, Sunderland had 71% of possession). However in the second they firmly stamped their authority upon the game, and Anelka was an integral part of this.

Often falling in alongside Michael Essien, so that Frank Lampard found himself as Chelsea's most advanced midfielder, Anelka consistently picked the ball up in the middle of the pitch before spraying it out wide, as shown below. 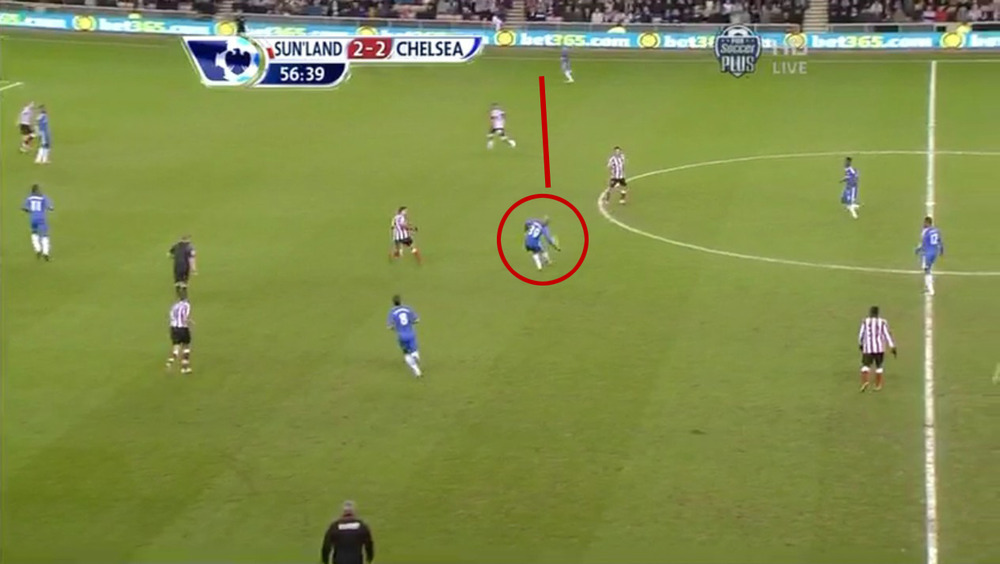 Sunderland struggled hugely in their attempts to stop him doing this. Lacking a true holding midfield player, the Black Cats faced an uphill battle. Anelka's unexpected deep-lying role meant that Steed Malbranque, and later Jack Colback, were drawn out of the anchor position Steve Bruce assigned them to. Once Anelka had dispersed the play wide, either he or Frank Lampard were able to run into the space vacated by the Sunderland midfielders.

Jordan Henderson was entrusted with the unenviable task of tracking Lampard. Whilst he eventually adjusted to this and tightened up somewhat, there were numerous occasions where Lampard was able to free himself, either via delaying his runs or simply anticipating where the his team-mates were going to put the ball, and have a shot at goal; good goalkeeping from Craig Gordon stopped the England international adding to his earlier penalty.

This game was won and lost in midfield. The Chelsea four of Mikel, Essien, Lampard and Anelka attempted a total of 273 passes between them, of which a staggering 220 were successful. In contrast, Sunderland's entire team managed only nine more completions, 229, in the 90 minutes.

Because of this midfield dominance, it was important that, when Sunderland did have the ball, someone supported Asamoah Gyan to ensure possession wasn't lost cheaply. 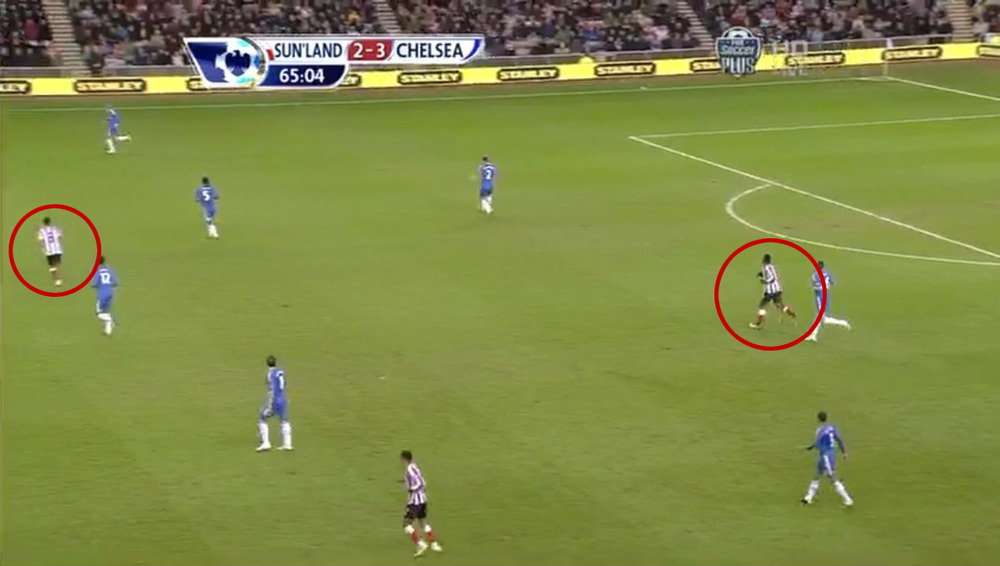 However, as is shown, Gyan was left isolated up front for the majority of the second half. Kieran Richardson is the closet team-mate to the Ghanaian, but a wall of three blue shirts divides them.

Whereas in the free-flowing first half when likes of Richardson and the two wingers had provided support for the frontman's hold-up play, the second half, and Chelsea's control, meant the Black Cats were reluctant to commit their midfield forward for fear of a counter-attack. Ultimately, when they did commit, Chelsea wrapped the game up with their fourth goal.

For all Chelsea's dominance in the second half, Steve Bruce will have reason to be both annoyed and disappointed that each of the goals his side conceded (with the exception of the fourth goal, conceded late on when searching for an equaliser) were down to entirely avoidable individual errors.

For the Blues' equaliser, Elmohamady is guilty of stupidity. Had he not clamoured all over Ashley Cole's back, it is doubtful the Chelsea full-back would have been able to convert Michael Essien's lofted ball into anything meaningful.

The second goal, though unlucky for the Wearsiders in that a well-timed Phil Bardsley tackle actually allowed Chelsea to break with pace, has to go down as a goalkeeping error. Anton Ferdinand should perhaps have been sharper to step out, but Salomon Kalou still had work to do when he latched onto Nicolas Anelka's through ball. Craig Gordon's subsequent decision to come rushing out of his box made the Ivorian's task a whole lot easier, as he slotted home first time to give his side the lead. 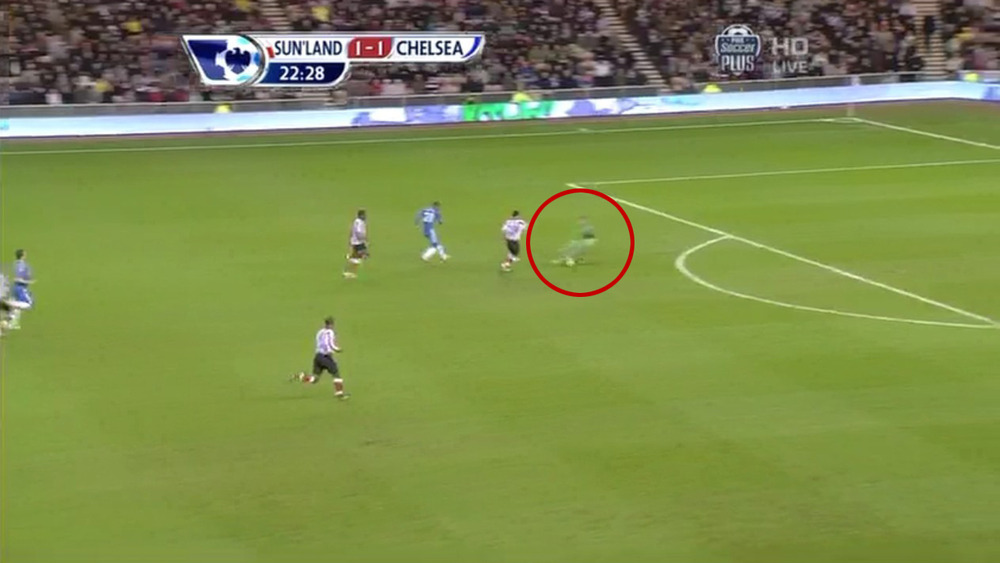 Sunderland had looked shaky on corners throughout the first half, so it was of little surprise when Chelsea's third goal came from one. After an excellent save by Gordon from a swerving Frank Lampard effort, John Terry was given too much room in the box and duly put his side ahead; again, had someone merely stayed with the ex-England captain as the ball initially broke to Lampard, this goal would have been avoided.

Despite these mistakes, and the defeat, Sunderland can take heart from this, knowing a similar level of performance at Stoke on Saturday lunchtime should yield three points. In the first 45 minutes, they caused a very good Chelsea side some very real problems, and were it not for Elmohamady's clumsiness or Gordon's rashness, they could have led at the break. In the second half, the Blues' quality told, but Bruce's men never gave up in the face of adversity. The top four is still a long way off for the Black Cats, but, compared to the embarrassments that have occurred against Chelsea in recent years, signs of progress are there for all to see.